Convention on Education and Work: how do school students see the relation between education and the labour market

Convention on Education and Work: how do school students see the relation between education and the labour market

During the week of the 23rd to the 29th May, OBESSU held the Convention on Education and Work in Brussels, Belgium, with the financial support of the Erasmus+ Programme of the European Commission.

The Convention on Education and Work aimed at looking into the relation between education and the labour market. To achieve it , the preparatory team developed a set of operational objectives: to critically analyse the employability and skills discourse which is promoted on the European level and how this is reflected at national level; to discuss the advantages and disadvantages of different education, training and labour market policy approaches; to explore the interconnectedness between social exclusion in education systems and the labour market, such as early school leaving and youth unemployment; to provide a space for dialogue between young people and decision-makers on the topic; to produce policy recommendations on education and work which can later be used to influence European, national and local decision-making.

The event was a success and everyone felt it brought very interesting and insightful discussions on the topic. The Convention was as well the culmination of a 5-week-long online phase in which participants had already started to get to know each other and to explore the topic from their home country perspective.

The event itself started on Tuesday the 24th May with two sessions dedicated to “reconnecting” participants (this time face-to-face), to introduce the objectives and the programme of the week 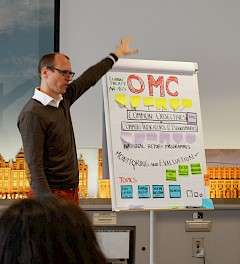 and to reflect on the expectations participants had already expressed in the online phase. The afternoon sessions were already dedicated to the topic of the Convention. Firstly we explored the main issues currently affecting young people in Europe: Early School Leaving (ESL), young people Not in Employment, Education or Training (NEETs), youth unemployment, poverty and social exclusion were discussed and mapped around the continent. Secondly, we reflected on the role of education in addressing the identified issues that affect young people.

The second day of the event was dedicated to setting the framework of European policy-making, and the morning was devoted to understanding the European institutional architecture and the different European decision-making bodies and processes. Then, we dived deeper in the policy-making and participants were introduced to the Open Method of Coordination (OMC), as well as the main EU education policies that serve us as a framework, namely the EU 2020, the ET 2020 and the Riga Conclusions (EU Education Policy – A short guide). For this session we counted with the participation of Florian Pecenka, Counsellor for Higher Education, Head of Unit, Science and Research at the Austrian Permanent Representation in the EU. Florian brought the national perspective in the discussion and helped participants to understand the link between the European education policies and the National ones.

The afternoon was dedicated to elaborating the positions of participants regarding the topic. We heard the opinions of the European Students’ Union (ESU) presented by Lea Meister, ESU chairperson. She shared the positions of ESU and engaged in an interesting debate with the participants.

The third day of the Convention focused more on the skills for the labour market. For the discussion we counted with the participation of Members of the European Parliament: Terry Reintke, Ernest Maragall, Marek Plura and Brando Benifei. All four are involved in different Committees in the European Parliament dealing with the topics of education, youth unemployment and skills for the labour market. The discussion was very interesting, and the debate questioned the shape and current functioning of the labour market structures, as well as the role of education in the society.

Quite intense the programme… don’t you think? Finally a free afternoon! Participants had the chance to explore the beautiful city of Brussels and enjoy the nice weather.

The fourth day was dedicated to analyse the transition policies between education and work taking a look at two main agreements between stakeholders to ensure the quality of these transitions: the so called “Pact for Youth” promoted by CSR Europe and the “European Alliance for Apprenticeships” promoted by the European Commission. For this purpose, the participants had the opportunity to confront with a full panel that included Ms. Sue Bird from the VET Unit of the European Commission, Tom Vrijens from the Youth Committee of the European Trade Union Confederation (ETUC), Tommi Raivio from CSR Europe and Marianna Georgallis from the European Youth Forum. The questions discussed were related to the need of having such pacts and whether education and business world should work closer together.

During the afternoon of the fourth day, we elaborated the conclusions of the Convention on Education and Work. Participants had the chance to reflect on their learning, on their ideas and 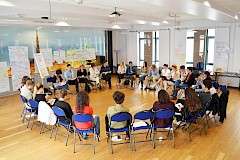 positions and finding a common ground for recommendations towards decision-makers. The recommendations are now on the table of the Board of OBESSU that will put together a document, share it with the members of the platform and later on voted upon in a statutory meeting to make it an official OBESSU position. This document will be later used in OBESSU’s advocacy work at European level.

The last day of the Convention was dedicated to plan and develop the local phase of the project. Participants are now equipped with knowledge, reflections and arguments to discuss around the topic of education and work in their national realities. Most of participants decided to talk to their national Boards, inform their peers in their contexts and start bringing the topic of the Convention to their unions’ agendas. We look forward to hearing their progress and developments!

The week would not have been possible without the hard work of the prep-team, Lejla (ASUBiH), Ruta (OBESSU Board Member), Larissa and Ketie (OBESSU Pool of Trainers), and the support of Ela, Estel and Giorgio from the OBESSU Secretariat. We really want to thank all of them for the positive energy and motivation!