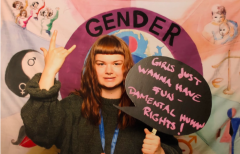 From the 11th to the 12th of October our Board member, Sara Þöll Finnbogadóttir, attended the Gender Equality & YOU conference organised by the Austrian Federal Chancellery, in cooperation with the Austrian National Youth Council and the European Youth Forum and with the support of the Austrian Presidency of the Council of the European Union. The event aimed at inspiring an open and positive based dialogue between stakeholders.

The event took place at the Austria Center in Vienna and brought together more than 250 people from members of the European Parliament to NGO representatives to discuss gender equality at the EU level. Numerous preparation workshops lead up to the conference in Vienna, e.g. The Annual Members Meeting of YFJ, the European Youth Event. In total 9 events lead up to the conference!

The event kicked off with Juliana Bogner-Strauss (Austrian Minister for women, families and Youth), Carina Autengruber (Vice President of YFJ) and Caroline Pavitsits (ANYC) as panelists.

The cherry on top were the break out sessions where previous preparation workshops identified 11 topics lacking gender equality. The break out sessions focused on some of the sessions that were identified: Labour Market & Economy; Relationships & Sexuality; Violence & Power Imbalance; Politics; Education & Training; Media.

The outcome of the event is a document created by conference participants. The document will feed into Austrian Presidency’s drafted council conclusions on gender equality.

This document is expected to be ready in December and we hope that the Council of the European Union will adopt the conclusions.