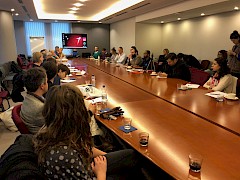 On the 11th October 2018, our Secretariat members Pina and Judit attended a breakfast meeting on Inclusive Education co-organised by the European Parliament Intergroup on LGBTI rights, ILGA Europe and the International Lesbian, Gay, Bisexual, Transgender, Queer and Intersex Youth & Student Organisation - IGLYO. The meeting was co-hosted by two Members of the European Parliament: Jill Evans and Julie Ward.

MEP Evans opened the meeting by highlighting how young people, and particular school students, still face too many challenges in the field of study curriculum diversity of representation, as well as in being target of negative comments, attitudes and conducts in school and in general before the age of 18.

Inclusive education, and particularly the inclusion of LGBTQI+ school students and staff was at the core of the meeting and the data presentation carried out by both ILGA Europe and IGLYO, and there could have not been a better day to discuss safe spaces for School Students than the Coming Out day!

Katrin Hugendubel, from ILGA Europe, remarked the importance of education and the impact of it on the everyday life of school students before sharing data produced by ILGA Europe in their “School climate survey”, a research carried out with the American Organisation GLSEN and the Columbia Univesity. The data presented in the survey include many different aspects: from policy to perspectives, from practices to educational curricula and do represent a worrying trend. In fact, in Europe, nowadays, still a big portion of students reports having been a target of negative comments, having perceived that school curricula are not inclusive and also report that school staff does not have the proper training to react to a report, or more in general in situations of discrimination.

As OBESSU and generally as school students, we are the first witnesses of a lack of inclusivity in our educational environment and study material: from stereotypes in books, to practices in our VET schools “for girls or for boys”, as well as we strongly fight against all sorts of hate speech and bullying, online and in school settings.

What we also notice and witness, is a resistance within school communities to welcome quality sexual and gender education, which is also why in 2019 we will focus a big part of our work on the topic of Sex and Gender: to advocate for quality inclusive sexual education, as well as to promote a policy of self-identification and well-being in schools. As MEP Ward also said in her remarks, we believe that schools should be safe spaces where each of us is free to be who we want to be, without feeling guilty, unsafe or afraid to be so.

As stated in our Political Platform, OBESSU demands “a school environment recognising every student as an individual person rather than a member of a gender, as well as a learning environment which actively encourages to question presumed gender and sexual identity constructions and combats discrimination and in which curricula and teaching material free from hetero-normativity and gender stereotypes”.

Still, a lot of work has to be done. As OBESSU we committed and will further commit to advocate for equality, inclusion and freedom, and we are very happy to be part of a bigger coalition and to have had the opportunity to share data, practices and ideas with other organisations and MEPs, as our work starts from sharing data as a way to counter excluding narratives from spreading in Europe.

You can re-watch the discussion here.