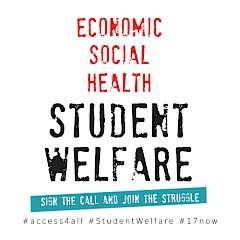 Every year, we identify a hot relevant topic for students all over the globe. This year, we launched a Global Call for Action on Student Welfare, calling on decision-makers to ensure #access4all through secure and adequate economic, social and health welfare for the wellbeing of all students!

Considering that, in 2004 students from all over the world met in Mumbai, India, for the World Social Forum to call on the 17th of November as the International Students’ Day, to commemorate those students who have fought for their rights and freedom and to take action. The 17th of November is not yet an officially recognised day but it is indeed a very important bottom-up process for the student community all over the world.

Through this year’s campaign, OBESSU wanted to raise awareness on student welfare, with a particular focus on three different aspects: economic, social and health studen 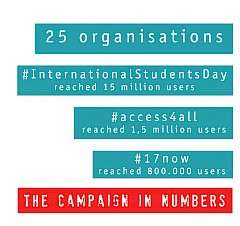 t welfare. The Global Call received the support of 25 international and national student and civil society organisations from several different countries (please find the entire list at the end of the Call).

Demonstrations, workshops, conferences, flash mob, online campaigns, social media activities and much more have been organised by students all over the world. Wondering what has been organised during the 17th of November? Check on Facebook, Twitter and Instagram using the hashtags #InternationalStudentsDay, #17now, #access4all and #StudentWelfare.

Furthermore, on the International Students’ Day, OBESSU invited all its Member, Candidate and Affiliate Organisations to take part in a survey on Student Welfare. The aim of this questionnaire is to collect as much information as possible on the different situations that school students have to face on this matter nowadays in Europe. All the data and the outcomes will be included in a larger and comprehensive research work on Student Welfare that OBESSU is currently running.

For any question, please feel free to contact us at 17now@obessu.org.