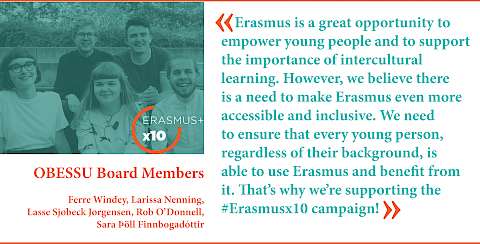 The #Erasmusx10 Campaign, launched by the Erasmus+ Coalition on the 13th of September 2017, aims at gathering transnational support and increasing commitment from EU and national representatives in reinforcing the Erasmus+ Programme, the EU's programme to support education, training, youth and sport in Europe. The purpose of the campaign is to mainstream such individual and collective mobilisation, and to raise civil society voices from all parts of Europe to advocate for a more accessible and inclusive Programme.

The idea of the campaign emerged when European political leaders started advocating for a significant uplift of the programme’s budget. The President of the European Commission Juncker himself, during the celebrations of the 30th anniversary of Erasmus+ in the European Parliament in Strasbourg, invited the institutions to be nine times more ambitious. Also several heads of State and government of some Member States expressed the same political will of a consistent increase of the Erasmus+ budget.

The campaign identifies 10 reasons why the budget of the ERASMUS+ Programme should be 10 times more: among them, OBESSU Board underlines that

"Erasmus is a great opportunity to empower young people and to support the importance of intercultural learning. However, we believe there is a need to make Erasmus even more accessible and inclusive. We need to ensure that every young person, regardless of their background, is able to use Erasmus and benefit from it. That's why we're supporting the #Erasmusx10 campaign!"

For more information about #Erasmusx10, please have a look at the concept note of the Campaign.