New Challenges for Global Cooperation: A trip to the USA

Friday, 15. November 2019
New Challenges for Global Cooperation: A trip to the USA 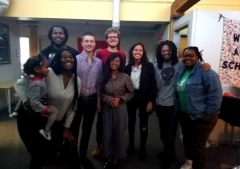 At the end of October, our Board member Giuseppe joined a trip between New York and Philadelphia together with some of our partners from the rest of the world.

At first, in Brooklyn, we met “Make the Road New York”, a grassroot organisation focusing on the fight against racist discrimination and on the defence of the rights of working-class communities and students. They have great centres that provide legal support for workers (particularly migrants that suffer many discriminations) but also spaces for leisure and local grassroot organising.

We met with their working group on schools that gathers many activists from high schools in the area, and we had a great discussion on the meaning of community building, on the importance of shared knowledge of Students’ Rights and of organisations fighting for better conditions for all learners. They enlightened us with their vistories: for the last decades, they managed to stop terrible policies from the NY administration that wanted to open new jails for under-aged people instead of supporting youth empowerment. Their work has an impact on the local level but also at a broader one.

Then we moved to Philadelphia and met the Philadelphia Student Union (PSU), the main school student association of the city. They denounce the situation of public schools in the city, with a lowering budget that is not enough to grant the right to study to all the students, again with clear discrimination against working class students and colored people. They also have to study in an extreme securitarian environment, with an excessive presence of the police that sometimes leads to arbitrary incarcerations, the worst answers to a growing social conflict. PSU attempts to introduce non-formal education methods, to empower school student activists in all of their chapters (school sections) and bodies have been a great example of self-organisation that reminded us our home organisations and school student unions.

The last meeting with grassroot structures was again in New York, but in Manhattan, where we met Teens Take Charge and IntegrateNYC. They both work against segregation in education, involving all kind of students, from middle school to college (university), an running many campaigns. They showed us how segregated is the educational system in the New York State and how people are excluded from higher education (and in general from quality education) on ethnic and social status basis. The low budget for public education causes dangerous differences between schools, with subjects missing in some schools (particularly music, arts and sports classes, or preparations to the entry tests of high schools and universities) discriminating students from working class communities that consequently have fewer opportunities to succeed in these fields and to access university and higher education institutions. Their advocacy  actions and rallies aim to shape the local political debate giving space to education and youth rights.

These meetings, together with the ones with foundations and study centers, were really important to understand the U.S. educational systems and the challenges for organised students in that country, and they were also great opportunities to reflect on our global work.

Together with activists from South Africa, Chile, the U.S. and Bangladesh we discussed our own contexts and the opportunities coming for all of us from the Global Student Forum that we are trying to establish. It’s a great challenge to have a coordination between continental platforms and national student unions from everywhere in the world, but it’s even more challenging to consider what we can try to do with activists in countries where student unions are not still existing or they still miss a national structure.

The sense of solidarity between unionists and activists is strong and spontaneous, and it was incredible to see how many things we have in common and how many of our actions are in reality quite similar. Common goals in different contexts and political situations, for learners’ rights, are a great first step for this new global adventure!