OBESSU joined the 100 Million delegation at the UN General Assembly 2019! 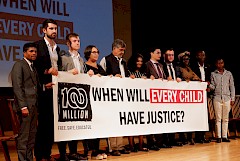 Our Board member Edvardas and our Secretary General Giuseppina Tucci were invited, together with other international activists, to join as official partners and supporters, the 100 Million delegation in New York City, a campaign initiated by the Nobel Peace Prize laureate Kailash Satyarthi that deals with children slavery, denied access to fundamental human rights, education, and children poverty. This was the opportunity to present the 100 Million report and to speak up for children justice. Edvardas and Giuseppina presented the European perspective, highlighting why European school students should care about their peers in developing countries. You can watch their presentation in the following link. 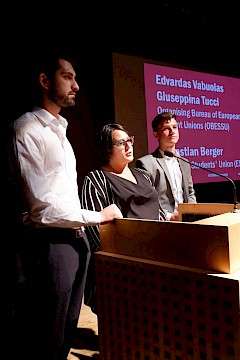 OBESSU took part in the Youth Blast, organised by the United Nations Major Group on Children & Youth (UN MGCY). Youth Blast is a roundtable discussion on Sustainable Development Goals on-going implementation where the delegates collectively identified the lack of accountability and poor monitoring/reviewing system as the core issues. The next day, this Major Group organised Inter-generational dialogues where organisations shared their actions in helping to reach these goals. Finally, the MGCY nominated our Board member Edvardas to be the representative of the group at the UN SDG Summit.

During the Summit, the Heads of UN Member States reported their progress on achieving Sustainable Development Goals. Yet, the absolute majority of them did not even mention children exploitation and their denied access to education; there were also no further commitments in addressing the issue, thereby the 100 Million campaign delegation collectively drafted a response.

In addition, OBESSU held a meeting with the Secretary-General of the Inter-Parliamentary Union (IPU), an umbrella organisation for all the parliaments in the world. We discussed school student involvement in parliaments, and as a result, OBESSU got an invitation to IPU’s General Assembly in the upcoming months, as well as their promise to take part in OBESSU co-organised Summit in Geneva, Switzerland, in December.

Lastly, OBESSU held numerous discussions on strategic decisions concerning the mobilisation’s actions for the International Day for the Eradication of Poverty taking place on the 17th of October, the mobilisation, initiated by the 100 Million campaign & Nobel Peace Prize laureate Kailash Satyarthi, is set to take place all over the world, including in continental Europe. More information to follow! 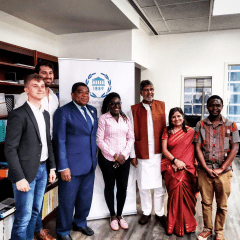 Board member of OBESSU