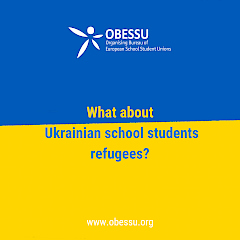 The Organising Bureau of European School Student Unions (OBESSU) draws attention to the situation of Ukrainian refugee school students, who, as they leave their home country, lack constant and coherent access to education.

Following the beginning of the Russian military aggression in Ukraine, on the 24th of February of this year, more than 2.8 million Ukrainian nationals have fled their home country, in an attempt to reach a safer environment, as reported by the United Nations. According to UNICEF, almost half of the Ukrainian refugees are children. Most of these children were attending some form of primary or secondary education before being displaced. However, after fleeing their home country, they are faced with the quasi-impossible situation of integrating in the educational system of the country they seek asylum in, since most refugees do not speak the language of the country.