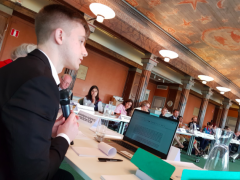 On 16th of September, the Swedish capital Stockholm gathered delegations from all over the world. Among presentations and workshops, there were a few panel discussions, where OECD members listened to perspectives of different stakeholders in education. Together they discussed their potential strength of cooperation and their role in making policy reforms more efficient.  The European school student perspective was delivered by Edvardas Vabuolas, Board member of OBESSU.

Edvardas was invited to be a panellist together with representatives from the European Parents’ Association, Trade Union Advisory Committee (TUAC), Business at OECD (BIAC) and a Norwegian government official representative. He began the presentation with a brief introduction of OBESSU - the modelling of school student policies and structure, followed by an explicit note, of why school student voice is important. He argued that it is wrong to presume that school students are lacking critical thinking, naïve and self-centred. Asking school students to take part in the decision-making processes would allow them to experience democratic processes first-hand: learning what it means to cooperate, compromise and work together for collective benefits. The latter would enable school students to develop modern values, that would later contribute to school students becoming active citizens.

In terms of efficiency in policy reforms, Edvardas argued that having school students involved from the beginning to the end during the implementation process would raise the school students’ incentive for the policy to be successful. That incentive would precisely account for time and efforts compression, as the reform would not endure any resistance from the school students but rather be endorsed.

To prove that such cooperation happens daily, he conducted a survey among OBESSU member organisations, that shared their practices of working together with different stakeholders. Edvardas presented nearly all the practices sent and they were welcomed with appreciation from the OECD delegations and other panellists.

We thank the Organisation for Economic Cooperation and Development, and particularly Diana Toledo Figueroa, the project leader and Jonathan Wright, the project assistant, for inviting us to the event and supporting us throughout.

Written by Edvardas Vabuolas, Board member of OBESSU. 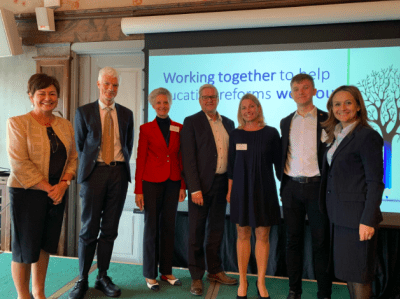