“Open borders are one of Europe’s greatest milestones”

“Open borders are one of Europe’s greatest milestones” 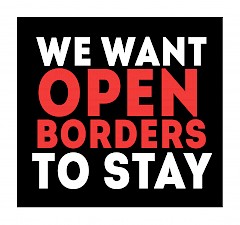 OBESSU, together with other 15 European youth organisations, co-signed an open letter to President Donald Tusk, to call upon the European Council to preserve the Schengen principles and the whole idea of European Union.

“Dear President Tusk,
We are writing to you today as representatives of sixteen pan-European youth organisations – representing millions of young people across Europe – because we are seriously worried about the future of the Schengen Area. Open borders are one of Europe’s greatest milestones – we want to keep it that way”.

“For our generation, border controls in Europe are a memory of the past – like black and white television or telephone boxes”.

Check out also the global campaign for the International Students’ Day – 17th of November 2015, focusing on freedom of movement, freedom to live in dignity and freedom to study.