SAY NO TO RACISM || European Action Week Against Racism 2017

SAY NO TO RACISM || European Action Week Against Racism 2017 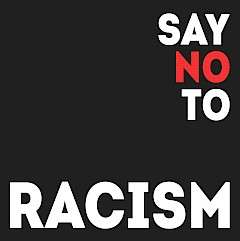 The 18th of March marked the beginning of the EuropeanAction Week Against Racism 2017 (18-26 March), a campaign run by the organisation United for Intercultural Action, a European network against nationalism, racism, fascism and in support of migrants and refugees.

Tomorrow - the 21st of March - is the International Day for The Elimination of all Forms of Racial Discrimination. This important day was established in 1966 by the General Assembly of the United Nations, following the brutal murder of 69 protesters in the South African township of Sharpeville in 1960 during a protest against the apartheid laws of the South African government.

Every year, since the early 1990s, the organisation United for Intercultural Action coordinates this weekly campaign calling on people all over Europe to “protest against racism and advocate for open, inclusive, and UNITED societies”.

The Action Week Against Racism is a reminder of the ongoing struggles to fight and tackle the issue of racial discrimination and inequality that still persists in our societies. Throughout this week, OBESSU will support the campaign through social media activities, encouraging everyone to take part in this initiative and to help us raising awareness on a matter that affects thousands of school students in Europe.

As OBESSU, we have long campaigned against any kind of discrimination and for inclusive school systems. Many of our Member, Candidate and Affiliate Organisations actively work against racial discrimination and xenophobia by delivering workshops in schools, running campaigns and events. But this is not enough! We also demand more actions from policy makers, teachers and other school staff to eliminate racism in schools and society. We strongly believe that only a broad coalition of actors can fight this persisting injustice!

Take an active part in the campaign and SAY NO TO RACISM!