School students from Romania are demonstrating for free transportation services 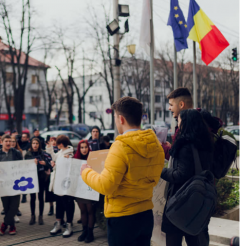 This Friday, more than 100 school students from all over Romania gathered in Timișoara, the city from which the Revolution against the communist system started in 1989, to demonstrate for free transportation services for all school students. Right now, Romania is facing a political crisis and both the Government and the Parliament are ignoring the demands of school students.

The two biggest political parties in Romania, the National Liberal Party and the Social Democrat Party are blocking the law 51/2019 in the Parliament, making free transportation impossible. CNE – the National School Students’ Council of Romania has had multiple initiatives to make the politicians reject this legislative matter that is privatizing the transportation, they even reached the members of the European Parliament for help but the law is still blocked. The protesters demanded that Iulian Iancu, member of the Parliament of Romania, will stop this crisis by putting up in the agenda of the Parliament this law so that the politicians can reject it and transportation services will become public again.

According to the results of the national report regarding the implementation of the School Student’s Statute (a law that features the rights and the obligations of the school students) in the 2017-2018, carried out by the National School Students’ Council, there are numerous cases in which the primary beneficiaries of the educational system do not receive their full settlements, most of them receiving only a small percentage of the money that should be covering their transportation costs, as following:

● 13% of the school students that are commutes actually receive the full reimbursement for their travelling costs.

The same report mentioned above shows us that 13,2% do not receive any money to cover their travelling costs. So, we can observe an alarming percent of 80% of the responders that get less than 50% of the money they should receive, taking into consideration that no less than 100% of them should receive the full reimbursement. In Romania, 380 000 children, aged between 3 to 17 years were not following any form of education in 2019.