‘Speak Together’ Event in Cluj-Napoca! 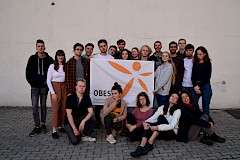 OBESSU carried out the ‘Speak Together’ Minority Languages Event in Cluj-Napoca, Romania, from the 4th to the 10th of October 2019. ‘Speak Together’ came out as a follow-up of Seeds for Integration, which has been greatly developed in the past 3 years in our Member Organisations.

17 participants from 7 Member Organisations (ISSU, CNE, FSS, RSM, LMS, MAKOSZ, UEM, KYC) and 2 Partner Organisations (SSUN, NYCU), our Board member Adrian Barbaros, two trainers and two members from the Secretariat came together to attend the event. The aim of the event was to gather school student activists active in working on minority languages rights and strengthen the capacity of their organisations to work on this issue nationally.

The event, enriched by different perspectives and in the context of a country with different minorities, aimed to explore and share the experience of minority languages in education amongst European school students, as well as draft a policy paper and other follow-up actions. It represented a spin-off product of Seeds for Integration and a legacy to OBESSU policy positions on Inclusive Education where Seeds for Integration played a fundamental role.

The domain of language learning has been vastly explored by many of the Seeds for Integration projects and always represents an important part of every policy discussion. Participants discussed the importance of migrants and refugees to learn the language of the welcoming country but never enlarge the discussion to the inside of the country and to the many minority languages that are largely forgotten by policymakers and practitioners.

The participants explored many topics. Access to education through minority languages, legal protections and the realities in different countries across Europe, used OBESSU’s “Inclusionary” tool created in 2018 to improve the inclusion of school student unions, working and advocating for minority language rights in politically hostile environments and using minority languages as a tool for intersocietal learning and breaking down barriers between different groups.

As a follow-up, OBESSU will fund up to 6-10 projects focused on transnational cooperation as much as on policy, advocacy or organising small activities and awareness-raising campaigns.

We would like to thank the participants from our Member Organisations that contributed and actively participated in the activities, and to SSUN and NYCU, our Partner Organisations that attended the OBESSU event. Special thanks go out to our prep-team members, Adrian, Rob, Michal, Felipe, and Dasa, for all their hard work and dedication throughout this whole process.