The outcome of the European Youth Event 2016

The outcome of the European Youth Event 2016 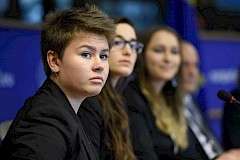 In May 2016, around 7500 young people from more than 30 countries gathered outside the European Parliament in Strasbourg, France to get through security checks at 8:00 in the morning. Why on earth would you queue for that? Well, because on the other side of ‘line’ the European Youth Event (#EYE2016) opened up!

The European Youth Event (EYE) is organised every second year and anyone between the age of 16 and 30 can attend the event. OBESSU had a nice little delegation of 15 people from different European countries, representing the Board and two OBESSU Working Groups. The two-day event included countless panel discussions, lectures, workshops and debates. But why is this relevant half a year later?

The biggest difference between the EYE and most other events where youth is able to participate is that the European Parliament actually follows up on some topics talked about on the event. This happened through the European Youth Hearings, which took place in Brussels (Belgium) in mid November. The speakers who attended the event back in May were re-invited to bring forward important ideas and raise points in front of the relevant Parliament Committees. As a representative of OBESSU, I got to speak in front of the CULT Committee (Culture and Education) on the 8th of November.

A report from the event has been made with the 50 most impactful ideas to change Europe. The topics I was given to speak on were the European Skills Agenda and Practical learning in Vocational Educational and Training. Inspired by the EYE report, I choose to talk about ideas 13 (Improve internet education to make the internet a more democratic and accessible place) and 32 (Boost project-based learning in schools to develop soft skills along with science and technology).

To clarify, I asked the members of the CULT Committee to put more effort in digitalisation in schools and source-critical education. I also spoke about the changing role of teachers due to the huge amount of information accessible by the students. If you are interested, read my idea here! For my other idea, I brought up an example from my own education, on when project-based learning just works as the perfect method to combine hard skills and fulfilling the curricula with the crucial soft skills that students need for the labour market but also for the rest of their lives. Find the idea here!

For further information or any question about the event, feel free to contact the OBESSU VET Working Group at vet@obessu.org.