Post-2015 agenda is a plan made by member states of the United Nations to end poverty, combat climate change and fight injustice and inequality. The plan includes 17 goals which – if reached – will transform our world into one of prosper, just and well-being.

The last time UN member states made such plan was in 2000 when they agreed upon 8 goals called Millennium Development Goals (MDGs). MDGs were not binding and were mainly targeting countries of the so-called Global South – those that were considered to be underdeveloped and developing. Every goal had a set of indicators which were used to determine if a MDG was successfully met or not. In the following image you can see the 8 MDGs; only 3 of them are considered achieved by the indicator. 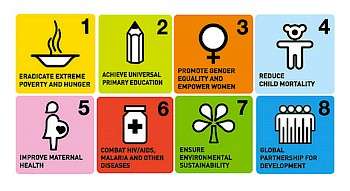 of a Post-2015 discussion on the goals, realising that many of them were still on track or still left behind because of many challenges in member-states. After this, at the 2012 Rio+20 conference, governments agreed to develop a set of Sustainable Development Goals designed to tackle the social, economic and environmental perspectives and to be implemented by member-states all over the globe. And this is how, in very brief, the Post-2015 process started.

Now, it would be very ambitious for us and confusing for you to go through the process in depth because, as you might imagine, the UN and its member-states have many internal mechanisms that we do not need to explore but we will try to clarify some basic concepts.

Sustainable Development Goals (SDGs) are the items composing the Post-2015 agenda. You can find them summarised in an image hereafter.

What we colloquially call Post-2015 agenda is a UN Resolution called “Transforming our world: the 2030 Agenda for Sustainable Development“. This Resolution is a plan of action composed of 17 goals that we call Sustainable Development Goals (SDGs). How will we know if the goals are achieved? Every goal has a set of targets that need to be reached in ordered to called a goal achieved. To reach a target, the United Nations are now in the process of developing measurable indicators as measures of success. 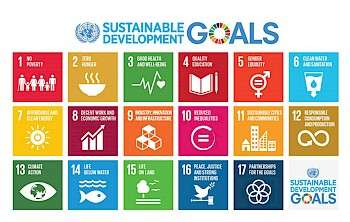 The SDGs were officially adopted on 25th September 2015 by the United Nations General Assembly in New York.

So has the process just been led by governments and high level officials? Well, not quite. Aside for governments who grouped together into a body called Open Working Group, other parties who led the process are UN agencies (such as UNESCO, which works on education) and various stakeholders have been involved in the process. Civil Society Organisations (CSOs) in fact have engaged, deliberated and advocated for their positions to be included in the documents.

Among the 17 Sustainable Development Goals, the one that concerns us as students is SDG 4 to ensure inclusive and equitable quality education and promote lifelong learning opportunities for all. Here you can find some facts and figures and also explore the targets in particular. After carrying out consultations, UNESCO and its Technical Advisory Group (TAG) proposed a set of 43 indicators to measure the progress of SDG4. You can find them here, they are included in the Education 2030 Framework for Action (FFA)

In its crib-sheet on the Post-2015 Agenda, OBESSU expressed its key messages for governments in order to make SDG4 student-centred and student friendly. So what does OBESSU think and how do students engage in the Post-2015 process?

OBESSU has been active in advocating for its positions and for the stands of the students to be included, but also we realise that this global agenda cannot and should not be based on the European reality, so for this reason we have been actively engaged in the regional consultations and discussion. For OBESSU, the fact that this goal now explicitly mentions inclusive quality education and lifelong learning opportunities is a big step forward, as much as it is for its targets on vocational education as on teacher training, citizenship and sustainability education, and diversity.

Since October, OBESSU has also been engaged in a project on the European implementation of the agenda together with the European Students Union (ESU), Education International and the European University Association. School and university students, together with teachers and universities recognise that this agenda applies to every country in the world and we believe that in Europe there is still much to be done on the SDG and the specific targets. With this in mind, facilitated by ESU, we drafted a Joint Action Plan built on specific demands and policy recommendations that will serve as a basis for regional and national actions and advocacy.

2030 may seem far away, but we think there is a lot to be done also in the so-called “Global North” and we wish to be ever more engaged in this process.

Written by OBESSU Board member Giuseppina Tucci, with the support of Dejan Bojanić (YFJ Board member).