YEAR FOR THE ELIMINATION OF CHILD LABOUR: STUDENTS & SURVIVORS STAND TOGETHER TO END INJUSTICE

Thursday, 06. May 2021
YEAR FOR THE ELIMINATION OF CHILD LABOUR: STUDENTS & SURVIVORS STAND TOGETHER TO END INJUSTICE

Youth leaders and activists unite once again for the UN Year for the Elimination of Child Labour - and call for action to end this injustice, once and for all.

Student leaders and youth activists from around the world have united many times over the past year to demand that the most vulnerable children and young people receive their fair share of support and protection during the COVID-19 pandemic. However, this call for justice, compassion, and solidarity has gone largely unanswered, and one of the worst outcomes expected will be the first rise in child labour in decades. 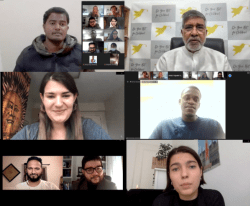 “As a student activist, I believe that we have to stand in solidarity with all young people to fight for access to good, quality education - it’s on us to organize and shape our world ourselves, and united, internationally, we are stronger and louder” - Alexandra Seybal, OBESSU Board

Before the current pandemic, children engaged in, or at risk of, child labour were already experiencing the impact of generations of discrimination and exclusion, often pushing and keeping families into such extreme poverty that their children were forced to work instead of go to school. The grave socio-economic impact of COVID-19 has deepened this inequality, with the rates of global poverty increasing at the fastest rate since records began. At the same time, the wealth of the 10 richest people rose by $540bn from March to December 2020.

THE UN YEAR FOR THE ELIMINATION OF CHILD LABOUR: TIME TO ACT

Frustrated by the likely increase in child labour as a result of the pandemic and the slow pace of action to prevent this, a unique coaltion of child labour survivors, youth and student organisations, trade unions, civil society, multilateral agencies such as the ILO and UNESCO, and progressive business and faith leaders have come together to demand a fair share of resources, policies, and social protection to end child labour once and for all. This campaign intends to use the UN Year for the Elimination of Child Labour to demand action from governments to stop this injustice against the world’s most marginalised children.

Child labour survivor-advocates and the world’s largest representative student unions have joined forces with the 100 Million campaign to encourage students across the world to take action. Together, we want to see students and survivors stand together to fight against this injustice. By holding campaign events which bring students in schools and universities together with child labour survivor-advocates who will share their testimony, we believe we can build meaningful bonds of solidarity and action through genuine, mutual dialogue and campaigning.

A student action guide to support this action was launched on Friday 30th April, with almost 100 student leaders from across the world, with special guest Nobel Peace Laureate Kailash Satyarthi.

The event opened with a moving call to action and personal testimony from inspirational survivor-advocate Manan Ansari. Manan, as well as sharing his own journey from child labourer to powerful child rights activist, provided context for the participants on the repeated failure of governments around the world to end child labour, despite repeated promises. Speaking directly to students, he reminded them that the 152 million children currently engaged in child labour “have the same quest, energy and potential for life as the children who are getting a good, quality education, but instead of going to school they are working in hazardous conditions in mines, hotels, agriculture and more.”

Kailash Satyarthi joined to extend his solidarity and support to the student leaders as well as sharing some of the important work he and his organisation are doing to protect vulnerable children during the devastating COVID-19 crisis in India. He issued a direct challenge to all students: “This is the time to convert your compassion into concern. Convert your concern into conviction. Convert your ideas now into anger. Convert your anger into action.”

The International Labour Organization (ILO) and UNICEF have suggested that for every 1% rise in extreme poverty, child labour could also rise by 0.7%. In real terms, this would mean that every 1% rise in global poverty would result in over a million more children forced into child labour. 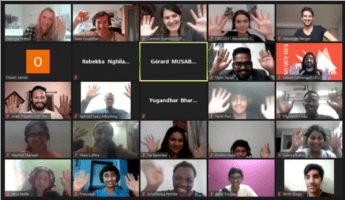 Elected student representatives co-organising the campaign also took the floor, with Alexandra Seybel from OBESSU opening by sharing her opinion that “it’s time to organise, to shape our world ourselves. ‘Nobody is free until everybody is free’... [we must] “stand in solidarity with all young people and we should fight for access to good, quality education for everyone”. Samuel Adonteng of AASU also highlighted that “we see the aspirations of so many children denied because of our unwillingness to act and cause meaningful change.”

The importance of united, international action was underlined by all the speakers, with Matteo Vespa of the European Students’ Union emphasising “the role of the global student movement to organise their constituency to hold their governments accountable for their doings and non-doings, in the interest of the perspective of students that otherwise would be left out of education.”

Ankit Tripathi and Carmen Romero from the Global Students’ Forum closed the event. Ankit, currently in his home country of India, which is currently experiencing a severe national COVID-19 emergency, opened with a moving reference to the importance of international solidarity and the interconnectedness of many struggles. He also reminded participants that “viewing child labour as ‘unavoidable’ is unacceptable” and called on everyone to act during this UN Year.

Finally, Carmen ended the event with the powerful call for urgent action over words: "“It is not enough to comfort the oppressed with the promise that justice will come. Justice needs to be exercised in the here and now. Otherwise it is anything but justice. There is no more time to wait, so join us.” - Carmen Romero, Global Student Forum